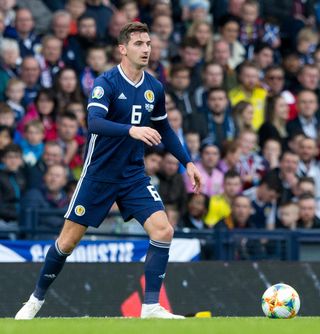 Scotland boss Steve Clarke stressed there was no leeway for blooding new caps in Russia after losing yet another player to injury.

Kenny McLean has joined Norwich team-mate Grant Hanley and his former Aberdeen colleague Ryan Jack in dropping out of the squad for Thursday’s European Championship qualifier in Moscow.

Clarke’s squad had already been decimated by injuries in central defence and up front.

👋 A good first day of training with some new faces in the squad. pic.twitter.com/IBjFutO4bR— Scotland National Team (@ScotlandNT) October 7, 2019

The Scotland boss has already given up on automatic qualification, with Scotland nine points off second-placed Russia with four games left while the hosts are also 22 goals better off.

Clarke is building for the play-offs in March but he will not sacrifice the potential to get results to experiment.

“No free hits,” Clarke said at the Luzhniki Stadium. “I would like to pick up 12 points from the remaining four games. Obviously it’s a tough one in Russia but there’s no free hits.

“We owe it to the thousand or so Tartan Army fans that are coming over as well to put on a good performance and hopefully go away with three points.

“It’s always disappointing when you lose players from the squad and overnight we have lost Kenny McLean as well,” Clarke said.

“It’s another blow but a great chance for someone else. It’s part and parcel of international football.

“It’s always disappointing to lose a player so late in the week. When Kenny reported, he had a little niggle. It’s not correct for me to say what it is, that’s for his club to work out.

“We were all pretty confident that Kenny would make it but the last 24 hours it didn’t get any better, it actually got a little bit worse. So we made the decision to allow Kenny to go back to Norwich.”

Uncapped Dundee United striker Lawrence Shankland is the only out-and-out centre-forward in the squad with the likes of Steven Naismith, Oli McBurnie and Leigh Griffiths missing.

And Hanley’s groin injury made it six players who have lined up at centre-back for Scotland in the past 18 months who are unavailable through fitness issues – along with Scott McKenna, John Souttar, Kieran Tierney, David Bates and Liam Cooper.

“I have been impressed with Declan in all my time in Scotland,” Clarke said.

“When he was at Livingston he did very well and showed a bit of versatility there to play right-back and right central defence. He has gone to Motherwell and had a fantastic start to his Motherwell career and deserves his call-up.”