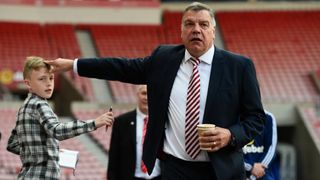 Sunderland manager Sam Allardyce is the clear favourite to take over as England boss, after the club confirmed that talks were underway.

Should he be appointed, the 61-year-old's first major task will be to repair the shattered confidence within the national team after their last-16 exit to Iceland at Euro 2016 - a result that cost Roy Hodgson and his assistant coaches their jobs.

Looking further ahead, Allardyce will be expected to navigate England's qualifying campaign for the 2018 World Cup with few headaches, before putting together a side capable of challenging for the latter stages of a major tournament at last.

But is 'Big Sam' the right choice? Can he get England any closer to a first trophy in 50 years? With the help of Opta, we look at his record in management and what fans can expect...

With 467 games, Allardyce is the second-most experienced manager currently working in the Premier League, behind Arsenal's Arsene Wenger (752).

Harry Redknapp - who had been tipped for the England job four years ago - is the only Englishman to have managed more games in England's top flight (641).

Allardyce's first foray in club management was way back in 1991, when he took charge of Limerick and led them to the League of Ireland title within a year. In his first season in the Premier League, in 2001-02, he took Bolton Wanderers to 16th place.

REDOUBTABLE WIN-RATE - BUT A BARE CABINET

Allardyce has won 33.6 per cent of his games in England's top flight - a record that dwarfs that of Steve Bruce (28.1 per cent), another who has been tipped for the England post.

His best season when it comes to win-rates was his first, when Bolton won 35.4 per cent of all their matches. He built on those impressive foundations to steer the club - now languishing in League One - to four successive top-eight finishes between 2004 and 2007. In 2005-06, they reached the last 32 of the UEFA Cup - their first experience of European competition.

Last season, Allardyce took over at Sunderland when they were 19th in the table, with an average of just 0.38 points taken per game. He increased that ratio to 1.2, and Sunderland ended the campaign two points ahead of rivals Newcastle United to avoid relegation.

Indeed, Allardyce has never suffered relegation from the Premier League and has endured it just once in his career, with Notts County in 1997. However, the Division Three title he won the following year is the only piece of silverware he has claimed in English football, not including victories in play-off finals.

GOALS GALORE - BUT MAINLY AT THE WRONG END

Allardyce's more pragmatic approach has not always won admirers in England. Wenger and Rafael Benitez have been particularly critical over the years, while some West Ham fans led a protest over the style of play he encouraged in east London.

Across 467 top-flight games, Allardyce's teams have scored 557 goals - more than teams managed by Mark Hughes, Steve Bruce or Martin O'Neill, but 67 fewer than oft-maligned David Moyes has managed in his 461 matches.

Despite being associated with commitment to defensive set-ups, Allardyce's teams have conceded 637 goals, more than any of the Premier League's longest-serving English managers aside from Redknapp.