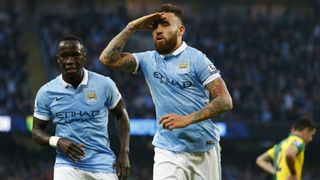 Manuel Pellegrini will hope for a change in cup fortunes when his Manchester City side travel to face Norwich City in the third round of the FA Cup.

The Premier League's third-placed side turned in their latest listless performance of an inconsistent period as they lost 2-1 at Everton in the first-leg of the League Cup semi-final on Wednesday.

Pellegrini uncharacteristically railed against decisions made by the officials at Goodison Park – namely the absence of an offside call for Ramiro Funes Mori's opener and the failure to award a penalty when City goalscorer Jesus Navas was brought down by Kevin Mirallas.

But there were concerns too for the Chilean within his own camp as centre-back Eliaquim Mangala departed at the interval with a hamstring strain to join captain Vincent Kompany (calf) on the sidelines.

Joe Hart's regular understudy, Caballero has played every game of this season's League Cup run and Pellegrini will continue the policy in the FA Cup at Carrow Road.

"Mangala has a problem in his hamstring," Pellegrini said.

"Of course it is a problem. We have just two centre-halves, Otamendi and Demichelis, and we have to play six or seven games more in January. It is a lot of games.

"Willy is playing the Capital One Cup. He will continue in the FA Cup also. I think he played very well."

There are more plentiful options in attack for Manchester City, with Raheem Sterling likely to return to the starting line-up having been an unused substitute on Merseyside.

Wilfried Bony could come back into contention after missing out in midweek following a kick to the calf, while Pellegrini may also call upon youngster Kelechi Iheanacho if he opts to take first-choice striker Sergio Aguero out of the firing line.

For Norwich, midfielder Vadis Odjidja could be handed a start after making a key impact from the bench during last weekend's 1-0 Premier League victory over Southampton.

The Belgian has featured in Alex Neil's matchday squads over the past month having spent time on-loan with Championship side Rotherham United earlier this season.

He entered the fray for the final half hour against Southampton and produced a wonderful piece of skill to set up Alex Tettey's 76th-minute winner.

"It's not easy because we have a very competitive squad and there are a lot of good players," he said. "But I’m trying very hard and it was like the first time I have got a lot of time to come on at Carrow Road.

"I had 30 minutes, so I was very pleased with that and I had a good impact on the game.

"The manager has been aware that I'm doing well in training and he always says to me to keep going and keep pushing."

Defender Andre Wisdom and winger Matt Jarvis could come back into contention for Neil following respective hamstring and knee problems.

Jarvis last featured during Norwich's Premier League match at Manchester City in October, going off at half-time during a 2-1 defeat.