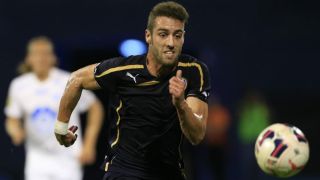 Norwich City have completed the signing of full-back Ivo Pinto from Dinamo Zagreb for an undisclosed fee.

The 26-year-old will join the Premier League side on a three-and-a-half-year deal, subject to the final paperwork being completed.

The former Portugal Under-21 international told the club's official website: "I'm very excited to come here and play for a big club in the Premier League.

"I'm looking forward to starting work to help the team achieve their goals."

Norwich manager Alex Neil is delighted to have acquired a player with Champions League pedigree as he looks to bolster his side's chances of avoiding relegation.

"Ivo has had Champions League experience this season, playing against Arsenal and Bayern Munich where he did very well," Neil said.

"He’s a Portuguese Under-21 international and at only 26 has his best years ahead of him. He is an athletic and good defender and will bring us options at the back."

Pinto won two league titles and the domestic cup during his time in Zagreb.