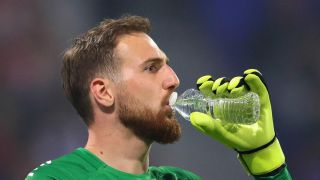 Jan Oblak will not push for a move away from Atletico Madrid but says the decision over his future rests elsewhere.

The Slovenia goalkeeper is rated as the best in the world by Antoine Griezmann, who scored twice as Atletico beat Marseille 3-0 in Wednesday's Europa League final in Lyon.

Oblak is a reported target for Premier League sides Arsenal and Liverpool, with the 25-year-old having a contract that runs to 2021.

That deal reportedly has a release clause set at €100million, which the Atletico chief executive Miguel Angel Gil Marin is keen to increase.

But Oblak has indicated he is willing to stay at Atletico, with his focus firmly on the end of the Liga campaign.

"I have a contract here and I don't know what will happen in the future. It doesn't depend on me.

"At the moment, I'm happy here and I don't think about anything apart from Sunday, when we need a point to stay second."