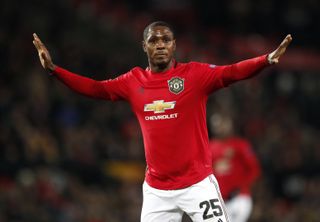 Odion Ighalo is delighted that his Manchester United “dream” did not come to an underwhelming end after a loan extension was belatedly struck with Shanghai Shenhua.

Having been allowed to join the club he supported since childhood in January due to the coronavirus situation in China, the disease’s spread to Europe saw play halted in mid-March.

Ighalo impressed with four goals in eight games before the suspension, but appeared to have made his last appearance for Ole Gunnar Solskjaer’s men with the season extended well beyond his loan’s May 31 expiration.

But a late deal was struck with Shanghai Shenhua to extend the loan until January 2021, much to the delight of the Nigeria international.

“I’m really happy,” Ighalo said. “It’s a dream for me to be here. I’m buzzing and ready to go.

“I feel OK. The last few days have been difficult as there have been different talks about it but now I’m really happy, so I need to concentrate fully. I’m here until the end of January, so it’s good for me.

“I decided I want to stay and I’m happy. Since the first day I arrived, I made it clear that I wanted whatever it takes to continue that work.

“It was very difficult, there were some talks, but I’m happy they finally agreed and got everything done. Everything is official now.

“I’m sending thanks to the Shanghai president and director for the support because they know this is what I want. So I’m thanking them and I’m happy that this has happened. They wish me all the best too.

“Like I’ve said, since I was young, I’ve been supporting this club and playing for it is a dream. Now I’ve extended my loan, it makes it more even clear and I’m committed as I know, in my head, I’m here until January ending.

“I just want to work hard and enjoy it, support the team and do whatever I can to make us go higher and higher.”

Ighalo’s four goals came in just three starts for the club, with the latter being a stunning effort in the 5-0 win against LASK in the Europa League,

Coronavirus measures in Austria meant that the last-16 first leg in March was played behind closed doors – something United will have to get used to when the Premier League resumes in front of empty stands.

“It was strange, you know, but it’s OK,” he told MUTV. “We know there is nothing we can do now but play behind closed doors and we’re happy to do it.

“In the game against LASK, it was strange because you could hear everything when your team-mates shouted. In a normal game, you can’t hear, but it was clear and loud.

“It’s a bit strange without fans, and difficult, but we have to be safe so we have to do it.”