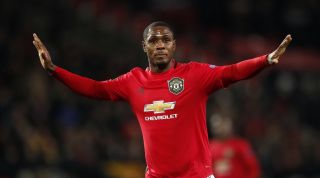 Ole Gunnar Solskjaer says Odion Ighalo is "doing what it says on the tin" after the Manchester United striker scored twice against Derby.

Ighalo notched a brace as United booked their place in the quarter-finals on the FA Cup with a 3-0 victory over Wayne Rooney and co. on Thursday.

The Nigeria international has now scored three goals in six appearances for Solskjaer's side since moving to Old Trafford in January.

And Solskjaer says he is delighted to see the Shanghai Shenhua loanee doing so well.

"[Ighalo] is doing what it says on the tin. He's come in and he's playing up front, a different type of striker," he said.

"He gets chances every game. Today [he] could have had another couple. [I'm] happy with him. Gives us a chance when Mason [Greenwood] and Anthony [Martial] can be kept fresh."

Ighalo is on loan at United until the end of the campaign, but Solskjaer has hinted that the club may consider signing him on a permanent basis.

"It doesn't hurt [living the dream] but he's here on merit, he's here because he is a goalscorer and a different type of striker for us," he told Sky Sports.

"We might get to the summer and think we want to extend this, who knows?

"He's come in as a breath of fresh air as well. He had chances in his five minutes against Chelsea, he scored against Brugge, he had chances against Watford, he had a very good save [from a shot] against Everton - there have been good saves, he doesn't miss the target very often.

"Even for Anthony, Mason and Marcus [Rashford] to learn that it is where the sharks are swimming. It's comfortable outside the box and you can have a few shots. It's in there where it might be a bit tougher and you might get hurt - that's where you get goals."

United, who will face Norwich in the quarter-finals of the FA Cup, host Manchester City in the Premier League on Sunday.