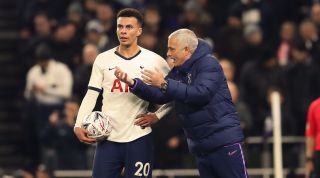 Tottenham Hotspur and Mauricio Pochettino had one of the most stable marriages in Premier League football.

Arsenal have not long dumped the rebound they settled with after their divorce from Arsene Wenger. Manchester United have rekindled an old flame - and the jury's still out on whether it's for keeps. Chelsea have finally grown up - after countless flings and intriguing short-term romances, they're looking to settle down with a sensible type like Frank Lampard.

But Tottenham? They had what every board spends their lives searching for. The one.

The news of Spurs "relieving" Pochettino of his duties was confusing. Sure, results were drab. Morale was low. There were promises presumably post-it noted on the fridge, scrunched up when the other wasn't looking. But a sacking seemed drastic. If Poch isn't safe, then who is exactly?

Once desks were emptied and the fog cleared though, the appointment of Jose Mourinho made some kind of sense. Not a match made in heaven by any means, but at least an arrangement made with cold, hard logic.

ALSO READ: 20 years of Jose Mourinho: The brilliant and bizarre moments of his career so far

It worked as a coup for Spurs: proof of their status as European football's newest A-listers. Equally, it recalled memories of Mourinho as an underdog. It's been fun seeing him cast in the Malcolm Tucker role, first at Real Madrid, then later Chelsea and United; causing friction with higher-ups and taking on the might of the mainstream media with the most bonkers spin he can find on last weekend's fixture. But we all miss Porto Jose. Inter Jose. Early-Chelsea Jose. The witty sideman who charmed his way to summits against all odds.

Regardless, no one could fail to miss the elephant in the room. Tottenham Hotspur - desperate for a remnant of silver to define, justify even, their almost-perfect manager - ended their relationship with Pochettino with not so much as a spoon to show for it - before moving in hours later with a serial winner, with more gold in his living room cabinet than round Mr T's neck.

That was the point in all of this.

It's March. We're now closer to the end of the season than we are to Mourinho's appointment. Spurs remain off the pace in the league, to the point where they can barely see Brendan Rodgers' bright white grin. RB Leipzig have recently turned up in North London and given a lecture in the kind intense, structure-first football that Spurs thought they were getting with Jose Mourinho.

And now, the FA Cup is gone too.

So what? It's just a cup. But while the FA Cup is neither the be-all nor the end-all of Tottenham's season, their withered exit from the tournament's last-16 merely draws a big, inky circle around the concerns fans have had about the manager since he swaggered into the still-warm hot seat. The football is, for some, unbearable. The progress is, to many, limited. If the whole point of sacking Mauricio was to have something to show for their status, then what do Tottenham have for their status?

When you hear the new FourFourTwo is out in shops todayhttps://t.co/ckOXAUDHEApic.twitter.com/mOI8gg7hCV— FourFourTwo (@FourFourTwo) March 5, 2020

Jose has now lost more league games this season than his predecessor had. Bringing in a serial winner was supposed to give Spurs a much-needed shot in the arm, but they look more tired than ever. This is a squad that looks ill-suited to his football, and with over three months' evidence of the foundations that the Portuguese is starting to lay over the ashes of what came before, it's still a puzzle as to what this side will look like in a year's time.

Yes, it's early days. Yes, Mourinho's two best players are sidelined and the electric form of Steven Bergwijn has given cause for hope. This was always a long-build rather than a quick masking tape job. Perhaps Spurs just need time to get over their ex and perhaps they really did hire the right man to do that.

Jose Mourinho is not the man you settle for if you're thinking of the long-term though - his history tells us that. Pochettino was building something - it hit a stumbling block and his bosses chose to start again with someone who could show them more instant results.

Results have not have been instant and Season One is looking like a washout. Perhaps both parties should adjust their expectations for this relationship.

EXCLUSIVE “I don’t get my motivation from proving Trump wrong. I don’t care what he thinks” – How Megan Rapinoe conquered the world

QUIZ Quiz! Can you name every FA Cup quarter-finalist of the 2010s?