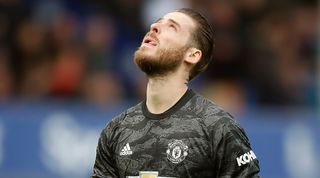 There was another David de Gea mistake on Sunday, followed by several excellent saves from the Spaniard who had lost his place in Spain’s national team to Kepa, who, in turn has lost his place in the Chelsea team.

Manchester United’s player of the season in four of five years from 2014-18 retains a significant bank of credit from fans who remember him making a huge difference to the team, but he’s also made more errors that have led to goals than any other Premier League goalkeeper since the start of last season.

Eric Steele is the man who first scouted De Gea as a 17-year-old playing for Spain and who encouraged United to sign him before working with him daily in his first two years at the club and helping make the former Atletico goalkeeper the best in the league.

“I was surprised to see what happened on Sunday because distribution was the one part of his game which he was so comfortable with,” Steele tells FourFourTwo. “We didn’t teach David that when he came in nearly nine years ago, it was already in his skillset. David knows himself that it was an error of judgement, that he took too long and was too casual. A player like Dominic Calvert-Lewin thrives on any sense of being able to charge a goalkeeper down. He did. He pursued him when certain players would have turned away.

“David has put his hands up and he’s had to do that,” adds Steele. “He’s been man enough to put his hands up a few times this season, but the good thing on Sunday was that he had opportunities to put the mistake right which he did. He quickly made a very good save low down with his left hand. He also made the save with the controversy at the end, so he will have felt better coming off having made a contribution and, knowing the man, he would have put the mistake aside by the time he went into to talk to Richard Hartis (United’s goalkeeping coach) the day after the game.”

De Gea is now 29. After overcoming a heavy first six months when he arrived in England when he was bullied by far bigger forwards, he has been United’s first choice goalkeeper since 2011. He’s already 32nd on the all-time list of United appearances, one game behind David Beckham and with more games than his boss Solskjaer, Nicky Butt, Patrice Evra and Phil Neville.

“David is coming into his prime now,” says Steele. “He has to accept that he’s a big part player in this team being built by Ole. He’s not the young kid on the block. He has to relish the challenge and say ‘I’m a major part of this team’. He will come through and the great thing about Man United is that he’ll get a lot of support from within. He’ll shut down in terms of the media and social media, not that he’s a great contributor to that. He’s got to rebuild and the only way you get it back is by performances which he’ll look to do. He’ll need positive performances and there are always games coming quickly to make them.”

Steele thinks that there is no fundamental problem with De Gea and respects his goalkeeping coach Hartis.

“I have no hesitation in backing David,” he says. “He has to come through this because the one thing you want from goalkeepers is consistency. He had that and then all of a sudden there’s a bit of inconsistency. If you make a mistake it’s bad enough. If you make a mistake at Man United it’s highlighted. He wants to play for Spain in Euro 2020 and his club form has got to get him in the international set up.”

De Gea has been on Spain’s bench for seven of their last nine games and his stock is much lower in Spain than in the UK following a poor 2018 World Cup finals.

In Manchester, United are particularly well served by goalkeepers, with on loan Dean Henderson, 24, thriving at Sheffield United, Sergio Romero, Joel Pereira on loan at Hearts and Kieran O’Hara on loan at Burton Albion. Lee Grant, 37, is the third choice keeper in Manchester.

Steele brought Henderson to the club when he was 14. “Dean’s doing so well that people are now starting to talk about him playing for England in the Euros rather than Jordan Pickford. That’s great for Man United, but the club have big decisions to be made by Ole and Richard in the next three or four months. Do they sell Dean or do they bring him back at the end of the season because if they do, Dean will want to come back and play. Having Dean back will bring a massive challenge for David. Dean will have had a full Premier League season behind him and he’s proven in the top league and proven at all the clubs he’s played for. When he went on loan again at the start of this season, he’s probably thought ‘If David is going to sign a new contract then I want to stay at a club (Sheffield United) where I’m enjoying it and playing every week.”

Steele thinks there was a case for bringing back Henderson already.

“I wonder whether United should have brought Dean back in January because David needs a challenge,” he says. “He doesn’t see that with Romero and Lee Grant. Romero has done what he was asked to do – he’s been a number two. He’s done a solid and sound job when he’s been asked to play, but I don’t see him as a two who can be a number one, but I do see Henderson like that. I could see Henderson coming back and getting a 10 game run.”

“David is intelligent and he knows Dean is there and doing well but he’s not at United,” states Steele. “That’s not in David’s hands but what is in his hands is to get his performance level back up to say ‘I’m your number one’. We used to have Edwin van der Sar, Thomas Kuszczak, who played 12-15 games per season and Ben Foster. Competition was high. We also had Champions League football and 60 games per season. That was – and is - important. Playing Europa League football doesn’t have the same pull.

It’ll be also an interesting conversation the next time David de Gea bumps into his neighbour Calvert-Lewin after Sunday’s mistake.

De Gea is the best-paid goalkeeper in the world and he’s long justified that status, but that’s not to say United fans can’t be concerned when he makes mistakes. He still has incredible reflexes and speed of hands, but his level is not what it was and Sir Alex Ferguson, for one, always wanted him to take more command of his area and the game situation around him.

Steele agrees. “David needs to be vocal. Needs to come and deal with crosses and take control of his area. He’s capable of doing that and I’ll continue to back him.”

COMMENT Once a marriage of convenience, it's now hard to imagine Wolves without Diogo Jota

QUIZ Can you name every Manchester United line-up to win a Champions League or Europa League final?