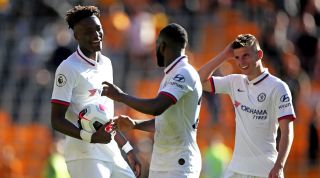 Tammy Abraham, Mason Mount and Fikayo Tomori have all become first-team regulars at Stamford Bridge this season, while Callum Hudson-Odoi has recently returned to the side following injury.

Frank Lampard has been rewarded for the faith he has shown in his club’s academy products, with Chelsea currently sitting fourth in the Premier League.

Ole Gunnar Solskjaer has also been keen to give opportunities to youth team graduates at United, with Scott McTominay, Andreas Pereira and Marcus Rashford having all played significant roles at the start of the season.

Axel Tuanzebe has also forced his way into the starting XI in recent weeks, and Mason Greenwood has been handed cameo roles in a handful of games.

However, although Tuanzebe and Pereira have been loaned out by United, McTominay, Rashford and Greenwood have never spent any time away from Manchester.

Conversely, Abraham, Mount and Tomori were all plying their trade in the Championship last term, the former with Aston Villa and the latter duo with Derby.

And Solskjaer believes that is the reason why Chelsea’s youngsters have made more of an impact in the Premier League this year.

“It’s a very exciting team,” he said of Chelsea, who face United in the fourth round of the EFL Cup on Wednesday.

“Frank has players who have been on loan for one or two years in the Championship. The difference between [the clubs is that] my youngsters are now almost stepping on to the scene.

“Axel Tuanzebe has been out on loan [at Villa] and you can see the benefit. I think they are benefiting from that now and they are a mature young team.”

After Wednesday’s trip to Stamford Bridge, United face Bournemouth in the Premier League on Saturday.

The League Cup has a strength that the FA Cup doesn't – an ability to adapt to survive. Here's how to save it