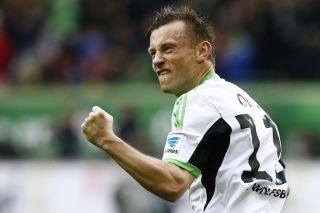 The Croatia striker had been heavily linked with a move to Premier League outfit Stoke City, with manager Mark Hughes openly admitting the Staffordshire club were pursuing a deal.

However, 34-year-old Olic - who would have been a free agent at the end of the season - has opted to extend his stay at the Volkswagen Arena.

He told the club's official website: "I am very happy that I now have clarity about my future and I will continue to play at Wolfsburg.

"We want to attack fully in the Bundesliga and in Europe in the coming season.

"It's gives me an incredible amount of (happiness) to be a part of this team and my family feels very comfortable here."

He said: "I am pleased that Ivi (Olic) will stay with us. You no longer need to waste words about his qualities.

"He has vast experience and is enormously important for our young team, not only from a purely sporting point of view."

Olic moved to Wolfsburg from Bundesliga and European champions Bayern Munich in 2012 and has scored 22 goals in 61 league appearances for the club.