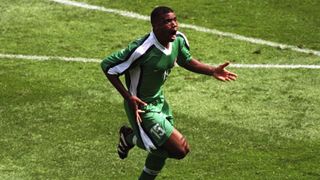 Keshi, who last month applied to become Ivory Coast coach, was sacked by the Nigeria Football Federation (NFF), with the former Nigeria skipper having coached the Super Eagles on and off for the past four years.

The NFF has since confirmed that another former captain, Oliseh, is in line to take over.

Felix Anyansi-Agwu, chairman of the NFF Technical and Development Committee, said in a statement: "An offer has been made, and there is understanding, but we have to work out the final details of the agreement in a few days.

"Of course, the executive board has to give approval for his appointment based on the final terms to be agreed."

Oliseh - who played for the likes of Juventus, Borussia Dortmund and Ajax during his career - picked up 63 caps for Nigeria between 1993 and 2002.

An Africa Cup of Nations winner in 1994, Oliseh also coached Belgian side Vervietois between 2008 and 2009.