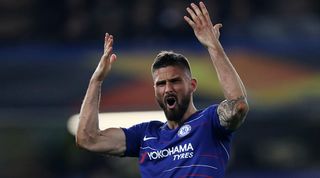 Crystal Palace are weighing up a January move for Chelsea striker Olivier Giroud, according to reports.

The France international has fallen out of favour at Stamford Bridge following the emergence of Tammy Abraham this season.

Giroud has been restricted to just one Premier League start in 2019/20, with Abraham having now established himself as first-choice centre-forward under Frank Lampard.

The former Arsenal man has made a further two top-flight appearances as a substitute, but he has only managed 100 minutes of action in Chelsea’s nine games so far.

The 33-year-old is keen for more regular involvement ahead of Euro 2020, and could seek pastures new in January.

Crystal Palace are keeping tabs on the situation as they consider a move for the World Cup winner in the New Year, according to The Sun.

Jordan Ayew has impressed since moving ahead of Christian Benteke in the No.9 pecking order at Selhurst Park, but Roy Hodgson still wants to add more firepower to his forward line in the mid-season market.

Giroud is out of contract next summer and could therefore be available for a cut-price fee at the start of 2020.

However, Lampard is reluctant to sell any first-teamers in January because of his inability to bring in any replacements.

Chelsea are currently halfway through a two-window transfer ban after being found guilty of breaching FIFA regulations regarding the signing of under-18 players from abroad.

Giroud will hope to persuade the Blues boss to sanction his departure, and Lampard is thought to be sympathetic to the striker’s situation.

Meanwhile, the Daily Star report that Abraham is on the verge of signing a new contract in west London.

The Chelsea academy product, who has scored eight Premier League goals so far this season, is close to reaching an agreement with the club.

Lampard’s side moved into fourth place with a 1-0 victory over Newcastle at the weekend.