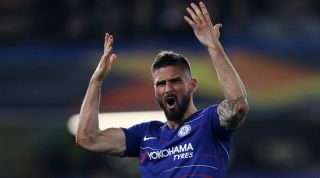 Olivier Giroud admits it is not “ideal” that he has lost his place in the Chelsea team to Tammy Abraham.

The England international, who is set to make his competitive debut for the country of his birth in the upcoming international break, has enjoyed a superb start to the season since returning to Stamford Bridge in the summer.

Abraham spent last season on loan in the Championship, scoring 25 goals to fire Aston Villa to promotion via the play-offs.

He started Frank Lampard’s first game in charge against Manchester United, but was replaced in the XI the following week when Chelsea hosted Leicester in west London.

That remains Giroud’s only start of the season, with Abraham subsequently finding his feet in the Premier League and scoring seven goals against Norwich, Sheffield United and Wolves.

Only Sergio Aguero has scored more often in the top flight this season, and Giroud has consequently been restricted to just 100 minutes of action in the league.

And although the French World Cup winner admits that he a little frustrated by the situation, he praised his team-mate for making the most of his opportunity.

“I'm fine, I've had hard times. Now it's not the ideal situation,” he told L’Equipe.

“At this moment, little Tammy is walking on water. Listen, it's hard to drop a striker when he's successful.

“I am patient. I work in training. You have to keep a good state of mind. We have a lot of games to play.

“Last week, I missed all three games because of a dirty virus that tied me to the bed. Now I feel much better.

“The coach preferred to start Tammy. It’s good for the team. It makes us want to continue working and shaking up the competition.”

Chelsea return to action in the Premier League on Sunday afternoon, when Lampard’s men travel to St Mary’s to do battle with Southampton.