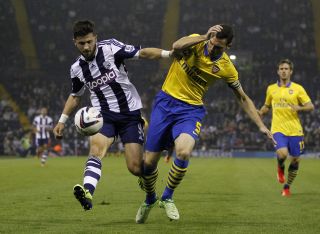 Republic of Ireland international Long came close to signing for Steve Bruce's side in the final moments of the transfer window, before the move fell through amid much finger-pointing from both clubs.

But Olsson has been impressed by the way the former Reading striker has negotiated the potentially awkward situation.

"I think Shane has coped with it well," he told the Birmingham Mail. "It’s just part of football, you have been in some transfer windows, one day you are going, next you are staying, it’s part of it.

"If you ask Shane, I think he’s happy and he’s coping with it very well. I haven’t seen any difference of him this month than before.

"I think he’s shown against Arsenal (in the 1-1 draw on October 6) that his head is still here, so we’re not worried about him."

And Olsson believes a bigger squad and increased competition could help improve performances on the pitch.

"I’m happy we managed to keep him," he continued. "We have competition all around now, it will do the squad good."

"Competition is vital for a team to progress and develop.

"It is vital for such a long season to have not only 11 players but 20-25 players, and that is what we were lacking a bit maybe the last part of last season. Now we have greater depth."