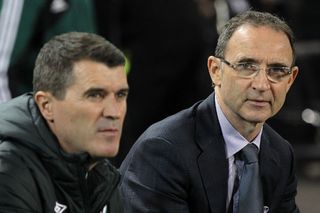 O'Neill believes Keane, the former Sunderland and Ipswich Town manager, and Celtic, will make a decision, one way or another, by Wednesday, when Ireland will travel to the United States for friendlies against Costa Rica and Portugal.

"I would imagine that, in the next few days, the situation will resolve itself," O'Neill said before Ireland's match against Italy.

"Whether it goes into Monday, Tuesday, Wednesday… we are not actually leaving until Wednesday, so I would imagine the situation would be sorted by then.

"Celtic are actively seeking a manager and they have a certain number of days to try and do something, because they will want a man in place for when they come back for pre-season (in late June).

"There's nothing definite yet, but I can imagine that before we travel to America something will have happened. He still has to be asked about the job. We would all be very, very sorry to see him go if, indeed, he does."

Lennon left Celtic on May 22 after four seasons in charge at Parkhead.

Since the Northern Irishman's departure, the likes of Keane, Michael Laudrup, Paolo Di Canio and Morten Wieghorst have been mentioned as possible options to take over at Celtic.