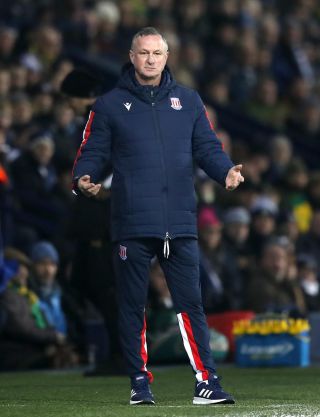 Stoke boss Michael O’Neill wants his side to improve their home form following their 2-0 win over Swansea.

Sam Clucas and James McClean hit second-half goals as City beat the Welsh side to record just their fifth home win in 15 attempts.

O’Neill said: “We have got momentum building. It has been a good start to the year from us and there are a lot of positives.

“We have to keep working to improve our home form. The atmosphere in the stadium in the second half helped drive the team forward.

“That positivity makes paying a bit more enjoyable and helps the team. It is important we send the fans home happy.

“I am delighted with the result and the clean sheet.

“It was a tough game, we didn’t start it well and there was as nervousness in our play in the first 15 minutes.

“It took us a while to work out how to make it more difficult for Swansea to build from the back.

“Once we got over that period we created belief and opportunities and we were good from 20 minutes on.

“We had the best chances in the first half, we were worthy winners with our second-half display.”

Freddie Woodman then saved one-handed from Joe Allen after 15 minutes as the Potters grew into the game.

Woodman kept out a weak Clucas shot with his legs after 33 minutes before the same player headed over seconds later.

McClean scuffed a 20-yard shot straight at Woodman as Stoke ended the half strongly.

Sam Vokes headed over from six yards just after the restart, before McClean failed to get his head on a brilliant Clucas cross a minute later.

The pressure finally paid off when Clucas drilled home from just outside the box after 55 minutes.

Matt Grimes smacked a free-kick against the crossbar as Swans looked for a quick response.

But McClean wrapped it up after he robbed Marc Guehi of the ball before shooting through the keeper’s legs.

Swansea boss Steve Cooper felt his side chucked away a good opportunity to take all three points.

He said: “We are disappointed not to win the game. The game was there to win with the way we started and this is a missed opportunity.

“The crowd were against Stoke at the start and we should have capitalised on that.

“We did not continue our good start and did not do enough to score goals.

“If you are not going to win a game, you have to make sure you don’t get beat.

“We never felt like we were under the cosh. We did not manage certain situations well enough.

“We did not do enough to win the ball back in the build up to their goal and the second goal can happen when you are chasing a game.

“There are players who we will not stand in their way if we want to go in the transfer window and they will have decisions this week.

“If that happens it may create a chance to bring players in, we won’t bring in unless players are freed up.”