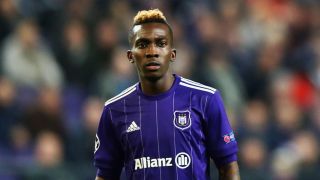 Galatasaray have signed Henry Onyekuru on a season-long loan from Everton.

The Nigerian joined the Toffees ahead of the 2017-18 season, but was immediately loaned out to Anderlecht.

He scored nine goals in 19 appearances for the Belgian side before a knee injury in January cut his campaign short.

Onyekuru arrived on Merseyside after impressing in Belgium with Eupen - his 22 goals making him the Belgian First Division A's joint-top scorer in 2016-17.

are glad to make the signing of Henry Onyekuru official!Nigerian  21-year old winger is joining us from on loan.Welcome, ! July 12, 2018