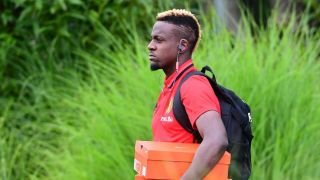 Belgium striker Divock Origi insists his side should not be considered favourites for their last-16 Euro 2016 clash against Hungary.

Origi's side head to Toulouse after winning their last two matches without conceding a goal, while Hungary were the surprise winners of Group F.

Belgium coach Marc Wilmots has claimed he would rather be facing England or European Championship holders Spain instead of Hungary, with Origi hailing the qualities of Bernd Storck's side.

"They are a really brave team," Origi said. "The players are not afraid. They fight for each ball.

"It won't be easy, they have players with a lot of qualities."

Origi revealed Belgium's preparations have not been affected by being drawn with Hungary, a match they will not have expected at this stage of the competition.

"We are training for this game as usual," the Liverpool forward said. "We are staying calm.

"We will determine a strategy with the coach. We all want to play a great match. It will be an interesting match for us.

"Personally, I think that there is no favourite in football. We have to prove our qualities. We have to believe in us. And they will believe in them. So it will be a good game. Of course, we hope to win this match."