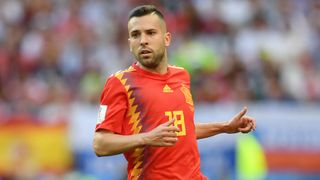 Sergio Ramos has described Jordi Alba as one of the world's best full-backs as he continues to be overlooked by new Spain head coach Luis Enrique.

One surprising element of Luis Enrique's tenure following his post-World Cup appointment is his treatment of left-back Alba, a player he worked with at Barcelona.

Alba is yet to be called up by the 48-year-old, despite previously being a key member of Spain's defence, and captain Ramos says the coach is leaving out one of the world's best.

"Myself and Jordi Alba have played many years together, he is one of the best in the world, as shown by his performances and statistics," he said.

"But then the coach is the one doing the line-up. For our [the players'] part, he will always be well received."

Ramos is expected to start in his hometown of Seville on Monday when Spain host England in the Nations League.