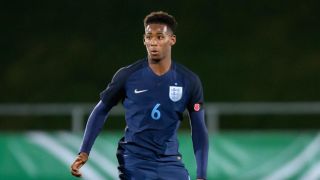 A month after recalling Reece Oxford from his loan spell at Borussia Monchengladbach, West Ham have sent the teenager back to Die Fohlen.

Oxford originally joined the Bundesliga side in June but only started two league matches and was brought home by the Hammers amid talk of a permanent switch to RB Leipzig.

No move materialised, though, and Oxford – an England youth international – has returned to Borussia-Park for the remainder of the campaign.

"We are glad that we were able to bring Reece back," said Borussia sporting director Max Eberl.

"He showed his great potential at the end of the first half of the season and we are confident that he will help us in the second half."

Borussia have agreed a new loan deal for with The 19-year-old will return to the until the end of the season. Welcome back, Ox! January 31, 2018

The 19-year-old played in two FA Cup ties for David Moyes' side and made a brief league appearance against Crystal Palace on Tuesday.