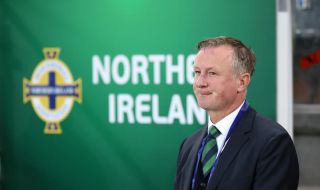 Sykes, 21, and Hearts defender Michael Smith have been added to Michael O’Neill’s squad for the games in Estonia a week on Saturday and Belarus the following Tuesday.

Here’s the squad for our next @UEFAEURO 2020 qualifiers against Estonia & Belarus! 💚👊🏼 #GAWApic.twitter.com/BWG52K6VNd— Northern Ireland (@NorthernIreland) May 30, 2019

Sykes has been in impressive form for Sky Bet League One side Oxford since joining them from Glenavon in January.

The former Newcastle centre-half is expected to retire as a player this summer and did not feature in Hearts’ Scottish Cup final defeat to Celtic last weekend.

O’Neill: “I left it up to Aaron (Hughes) in terms of his involvement. He is invaluable with the younger players in the squad.” #GAWA— Northern Ireland (@NorthernIreland) May 30, 2019

O’Neill’s squad head to Austria on Monday in preparation for next Saturday’s match against Estonia in Tallinn.

Northern Ireland currently sit top of Group C, three points ahead of Germany, who have a game in hand, and Holland after winning both of their opening matches against Estonia and Belarus in Belfast in March.