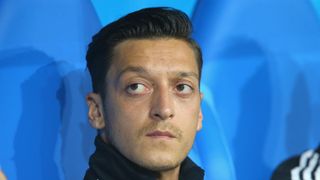 Mesut Ozil has returned to Germany's starting XI for their crucial World Cup Group F clash with South Korea after being dropped for the 2-1 win over Sweden.

Arsenal star Ozil produced a poor display against Mexico in their opener, as the world champions lost 2-0.

Sami Khedira was also a casualty from that loss, losing his place to Sebastian Rudy, who in turn suffered a broken nose against Sweden.

Like Ozil, Khedira features again from the start in Kazan, while Mats Hummels returns from a neck injury to partner Niklas Sule, who replaces the dropped Antonio Rudiger.

Sule and his future Bayern Munich team-mate Leon Goretzka are making their first starts of the finals.

Germany can make absolutely certain of a place in the knockout phase with a victory by two or more goals.