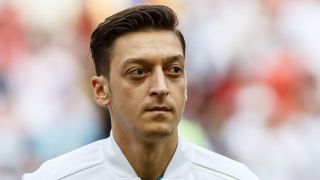 Bayern Munich chief executive Karl-Heinz Rummenigge said any issue with Mesut Ozil is not racism-related, but claimed comments from the Arsenal star's agent are untrue and 'getting on his nerves'.

There has been significant fallout since Ozil announced his retirement from international football earlier this month after he released a three-part statement, addressing criticism he received following a meeting with Turkey president Recep Tayyip Erdogan.

Ozil has Turkish roots and has subsequently accused sponsors, German media and German Football Federation (DFB) president Reinhard Grindel for scapegoating him after the country's shock group-stage exit at the 2018 World Cup.

The 29-year-old playmaker, who earned 92 caps with Germany, alleged the treatment of him was comparable to racism as he believes his Turkish roots had been unfairly disrespected.

However, Bayern CEO Rummenigge played down the accusations from the 2014 World Cup winner and said words from Ozil's agent Dr. Erkut Sokut are false.

"He has not been criticised because he is of Turkish descent," Rummenigge claimed in an interview with SPORT BILD.

"This is a fable told by his advisors. That's getting on my nerves anyway.

"The consultants give more and more statements and interviews these days. This is partly like a fairytale lesson."

Sokut had previously been in a war of words with another member of Bayern Munich's hierarchy when he claimed president Uli Hoeness made "foolish" comments in the wake of Ozil's retirement announcement.