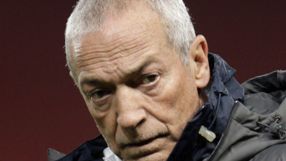 The Portuguese was sacked by Barca's struggling La Liga rivals Malaga earlier this month before being hired last week to replace Nikos Nioplias.

"It is a great honour for me to be made captain, my responsibilities have increased and as always I will do everything I can for Panathinaikos," Cisse told reporters.

The winless Greeks are bottom of the group on two points with four out of six matches played, one behind Rubin Kazan, and their prospects of making the last 16 look bleak.

Barca and FC Copenhagen would both advance if they beat Panathinaikos and Rubin respectively on Wednesday and a draw would be enough for Barca if Rubin do not win.

The 2009 champions could even afford to lose by three goals and still go through if Copenhagen beat the Russians.

Barca warmed up for the trip to Greece by crushing Almeria 8-0 on Saturday, a result that equalled their biggest-ever league victory, back in 1959.

Panathinaikos are also on goalscoring form, having defeated Iraklis 4-2 on Saturday to cement top spot in the Super League, with Cisse netting twice to take his league tally for the season to 10 goals.

Barca forward Bojan Krkic, who notched his first strikes of the season with a double on Saturday, said he and his team mates were focused on the Panathinaikos game and not distracted by next Monday's La Liga match at home to arch rivals Real Madrid.

"Wednesday is a key game for us and the Madrid game will come around soon enough," the 20-year-old said.

"It always helps your confidence to get off the mark," he added of Saturday's win. "It was a bit of a liberation for me and it gave me a real boost of confidence and calmed my nerves."

Barca have lost only one of their last 14 Champions League away games, drawing nine. Coach Pep Guardiola is taking charge of his 30th match in the competition and has lost only three.