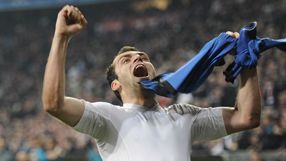 Pandev, who scored a superb winner for Inter Milan to send the Champions League holders into the last eight on away goals against Bayern Munich on Tuesday, was named by Jonuz in Macedonia's 20-man squad for the March 26 game at Croke Park.

The 27-year old striker threatened to quit international football last October, when he told local media he was fed up with fans jeering him and his team mates after Macedonia's 2-2 home draw with Armenia.

Pandev has since missed the 2-0 win away to Andorra and a 1-0 home defeat by group leaders Russia but Jonuz said Macedonia's prolific hitman has had a change of heart.

"I think his future appearances for Macedonia were never really in doubt because it was an emotional reaction which I fully understand," Jonuz told Reuters.

"All he really wanted was support for himself and the team and I fully back him in that request because I am behind the players, who deserve more credit and patience from the fans.

"There is no doubt Pandev will play for Macedonia for a long time to come, he is the pack leader and a fantastic player. He missed the last two games because he wasn't fully fit and we didn't want to take any chances."

Macedonia, who have never qualified for a major tournament since they gained independence from the former Yugoslavia in 1991, are fifth in the group with four points from as many games, five less than pacesetters Russia.

Ireland, Armenia and Slovakia are tied on seven points from four games and Jonuz acknowledged the Macedonians needed a win in Dublin to stay in the hunt for a berth at next year's finals in Poland and Ukraine.

"This is a very balanced group with lots of surprising results behind us and probably more on the cards, so it is absolutely vital for us to get a result against the Irish in Dublin," he said.

"We are a good team lacking a little more confidence and I will tell the players to go out there purposefully, to take the game to Ireland and play attacking football."