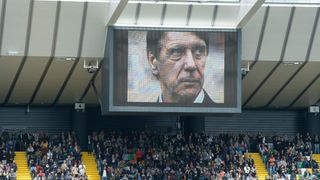 Some of the biggest names in Italian football have paid their respects to AC Milan and Italy great Cesare Maldini.

The former Milan defender and Italy coach died on Sunday and was remembered by many at his funeral on Tuesday.

"We just want to thank you for the wonderful and unique journey we had together," the letter read.

"It will make us smile every time we think of you. We were close in every moment, not knowing that you were going.

"When you left us an extraordinary thing happened: we were inundated with messages of affection for you, not banal sentiments, touching ones.

"You left a little bit of yourself in all these people.

Roberto Baggio said he was thankful for Cesare's support, particularly after missing the penalty that would have won his Italy team the World Cup in 1994.

"Every time we met I was hugging him and I was apologising for not giving him the chance to become world champion," he said.

"However, he always smiled and told me honestly not to be worried about it."

Former Milan midfielder Clarence Seedorf said the ceremony was a fitting tribute to the man who played over 340 games for the club.

"He was always available and very kind all the time," he said.

"Paolo is a friend for me, it is always sad to see the whole family suffering.

"It was a touching ceremony, a wonderful tribute that Cesare Maldini and his family truly deserved."

"I used to watch Maldini as a player together with Scirea when matches were broadcasted in black and white," Marotta said.

"As a coach he showed great values, I knew him very well and he was an example for me from a managerial point of view.

"He was able to transmit tranquility and his death represents a very important loss in the football world.

"Today’s football is only business and lost the original identity that Cesare Maldini interpreted."