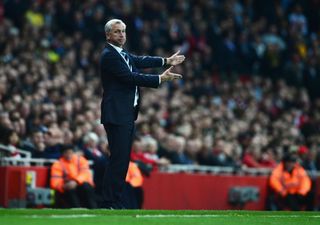 Pardew saw Newcastle lose a sixth consecutive top-flight game for the first time since 1987 on Monday as Arsenal cruised to a 3-0 win at the Emirates Stadium.

Newcastle have taken just 13 points from 17 league games since the turn of the year and supporters have been expressing their discontent in recent weeks.

While Pardew acknowledged that there was no hiding place from their woeful recent run, he appeared to suggest that it could be down to a lack of strength in the squad.

Newcastle have failed to make a permanent senior signing in the last two transfer windows, while allowing the likes of Yohan Cabaye to leave for PSG, and Pardew called for the club to be "stronger" next season.

"We have to reflect on the second half of the season and make sure we don't get ourselves in that position again," he said.

"We have to make sure we are stronger.

"The first half of the season maybe we overstepped the mark or excelled to a degree.

"I thought we gave good value for money for this football club in the first half of the season (but) in the second half we haven't.

"We have to make sure we give full value."

Newcastle remain in the top half of the Premier League but can be caught by Stoke City and Crystal Palace, which would leave them 11th.