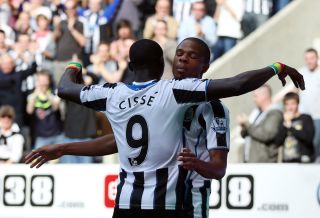 The 28-year-old was a revelation after joining Newcastle from Freiburg in January 2012, scoring 13 goals in his first 14 Premier League appearances before the end of the 2011-12 campaign.

However, Cisse followed that up with a more modest return of eight in 36 games last term, and has failed to score in seven top-flight games this season.

HIs last Premier League goal came against Fulham on April 7 but, even though he was dropped for Newcastle's defeat at Everton last week, Pardew still has faith in his ability, and wants him to get on the scoresheet for his country in their FIFA World Cup qualifier against Ivory Coast on Saturday.

"I felt sorry for Papiss in Cardiff on Saturday," he told The Chronicle.

"I thought two or three things could have dropped for him during the game but they didn't.

"So, hopefully he can score when he is away with Senegal this week. That would do him the world of good.

"They have a massive game against the Ivory Coast and it's one I'm looking forward to watching."