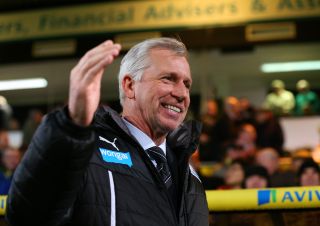 Pardew's men were left frustrated in their first game since news of midfielder Cabaye's imminent switch to the Ligue 1 leaders was revealed as Newcastle settled for a 0-0 draw at Norwich City in a game that saw striker Loic Remy and midfielder Bradley Johnson sent off in the closing stages.

The 52-year-old was pleased with a performance in which the visitors dictated for large periods and insisted he has no ill-feeling towards Cabaye.

"We hit the woodwork three or four times. I can't remember the last time we created so many chances and did not score away from home. We defended well and I'm very proud of the performance.

"We looked a little bit different without Yohan Cabaye but in a good way. This club is never going to be about one player.

"For sure Yohan Cabaye would probably get in my all-time Newcastle best XI. For us he was outstanding. We wish him the very best and I hope our fans do. He wanted to leave.

"We were honourable to him. He's got a dream move and we have to use that money wisely now, like we did with Andy Carroll.

"In that summer we brought in Yohan and a couple of others that took us forward, so that is how we're going to have to try and break into the Champions League places now.”

Pardew also confirmed that Borussia Monchengladbach striker Luuk de Jong will have a medical on Wednesday with a view to a loan move.

"Luuk de Jong we're hoping will have a medical (on Wednesday)," he added. "He'll come on loan. He's a player we really liked when he was in Holland. He scored a lot of goals.

"He went to Germany and it hasn't quite happened for him, so this gives him a second opportunity and we hope he takes it."