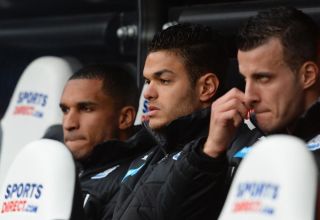 The Frenchman has not featured in either of Newcastle's last two matchday squads and revealed this week he was "sad and frustrated" at being frozen out of Pardew's plans.

Newcastle have lost their last six games in a row, scoring just once in that run, leading supporters of the club to question why there is no place for the mercurial attacker.

However, Pardew reiterated recent comments that his main focus was on the team rather than individuals and stated he was not concerned by Ben Arfa's worries.

"They are his comments. My comments are the same as before - I pick the team on merit," he said.

"I've not picked the team for Cardiff at the moment. The only thing I'd say to our supporters is that the team comes first.

"This is not about me, Hatem or any individual player. What is important is the team and performance.

"The team has worked very, very well. It’ll be a strong side that I put out. I expect us to win."

Pardew strongly hinted that the former Marseille man is now consigned to training with the reserves - with a close-season exit looking increasingly likely for the 27-year-old, who has just over a year remaining on his contract at St James' Park.

Under-fire Pardew confirmed that Luuk de Jong could be set for a return from injury against Cardiff in a match the Newcastle boss feels is "very important".

"(Ben Arfa) trained with a different group to the one that I worked with," he added.

"Luuk de Jong has returned to the group. Other than that, everyone who was at Arsenal will be available.

"(Against Cardiff) we have to put a performance in that gets the stadium on our side and gets a win. Saturday is very important.

"It's been a season that has been difficult (for Cardiff). They are fighting for their lives and it will make the game open."