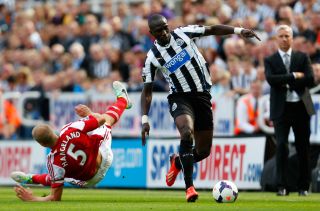 The 24-year-old, who joined from Toulouse in January, made an immediate impact in the Premier League, netting twice in just his second game for the club against Chelsea.

Although Pardew has started Sissoko in all eight of Newcastle's league games so far this season, he is still looking for the France international to improve his performance levels as the club prepare to face Sunderland on Sunday at the Stadium of Light.

"I think Moussa is a player who's perfect for the Premier League in terms of his physical stature, his mentality, his work rate and his quality," Pardew told The Northern Echo.

"I think he's getting the balance right. He's one of the players we're looking to for consistency of performance.

"If we can get him consistently in the sevens and eights (out of 10), then he's going to be a massive asset for the club."