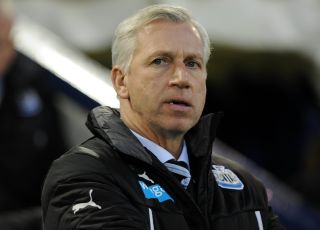 While Newcastle have been in impressive form during the first half of the season, sitting eighth having won half of their 20 Premier League matches, Pardew believes his forward line needs addressing.

With QPR loanee Loic Remy set to return to Loftus Road in May and Shola Ameobi's contract due to expire at the end of the season, Pardew has set his sights on a striker, although he stopped short of suggesting a deal would be concluded in the current transfer window.

"I do think in the striker department is an area we could possibly look at because Shola’s contract ends, Remy is not our player and that leaves Papiss (Cisse) on his own, really," he said.

"We should have more than that, so that’s an area I am looking at.

"I have said already that we will be strategic in our transfer dealings, and that’s what we are going to do."

Newcastle face Cardiff City in the FA Cup on Saturday and  Pardew confirmed his plan to rest key players, with the likes of Yohan Cabaye and Fabricio Coloccini already ruled out, while Tim Krul is a doubt.

He also called for authorities to address the balance between league and cup football after Aston Villa manager Paul Lambert said his main priority is staying in the top flight.

"We are going to use some fresh players because of the nature of where it’s at," Pardew added.

"That (balance) needs to be looked at in my opinion if they want the FA Cup to go back to its former glories."