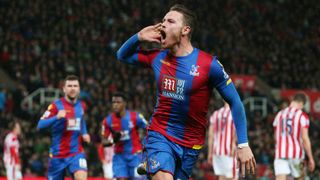 Connor Wickham will replace Tottenham's Harry Kane as the hot topic of the Premier League if he can improve his scoring form, according to Crystal Palace manager Alan Pardew.

Despite a slow start to the season, England international Kane has netted 12 league goals to help improve Tottenham's chances of a top-four finish.

Palace, who are seventh in the table, have struggled in front of goal this campaign, having netted the fourth lowest league goals (23).

However, following the return from injury of Wickham, Pardew believes his powerful forward has the potential to take the league by storm - should he improve his prolificacy.

"Spurs have the best goal scorer in the Premier League, in my opinion – Harry Kane," Pardew said. "If Kane was in our team we'd be in the top four.

"Wickham coming back to us has given us a huge lift. If he gets goals on the back of his performances we're going to have a real player.

"People will start talking about Connor Wickham and not Harry Kane if Connor starts adding goals."

Out-of-form Palace, who have lost their last three games, meet Mauricio Pochettino's side at Selhurst Park on Saturday.