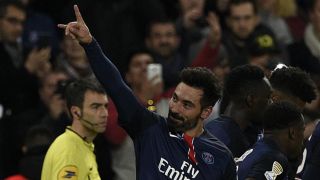 A 12th successive victory for PSG sets a new club record, but Laurent Blanc's men toiled for much of the semi-final and relied on some superb last-gasp defending to keep Toulouse out.

Lavezzi put the hosts into the lead at the Parc des Princes after 65 minutes, rolling the ball into an open goal after goalkeeper Mauro Goicoechea had blocked his initial shot, with Di Maria's fine individual effort sealing the win seven minutes later.

Toulouse, who have lost three times to the Ligue 1 champions in the space of 12 days, had a late chance to pull one back when Martin Braithwaite was fouled in the box, but Nicolas Douchez superbly saved the striker's penalty.

The only downside for PSG, who will face Lille in the final after they thrashed Bordeaux 5-1 in the first semi-final on Tuesday, came in stoppage time when captain David Luiz limped from the field following a collision in the box with an apparent knee problem.

Blanc made seven changes from PSG's 5-1 Ligue 1 win against Angers on Saturday, with Edinson Cavani given a chance to impress up front as Zlatan Ibrahimovic was rested.

Jean-Kevin Augustin embarked on a thrilling 40-yard run into the box that was halted by an excellent challenge from Uros Spajic as the holders probed early on.

Toulouse, seeking their first Coupe de la Ligue final appearance, were causing PSG problems on the break and only a fine tackle from Presnel Kimpembe prevented Wissam Ben Yedder from having a clear chance to add to his five goals in the competition.

Benjamin Stambouli saw a long-range strike drift off target after 23 minutes before Lavezzi dragged a shot wide of the far post as PSG struggled to break Toulouse down.

Adrien Regattin shot straight at Douchez from 30 yards in the final minute of the first half and referee Amaury Delerue was replaced by the fourth official shortly after the break due to an injury.

PSG finally took the lead with 25 minutes remaining, Lavezzi clearing the offside trap to race on to a lofted Adrien Rabiot throughball and beating Goicoechea at the second attempt.

Toulouse had lost their three previous matches in all competitions and looked well beaten after Di Maria doubled PSG's lead.

The Argentina international skipped through two tackles before smashing home a superb strike from just outside the box. Substitute Ibrahimovic almost added a late third, but Goicoechea saved at his near post.

Toulouse were given a late lifeline when Kimpembe brought down substitute Braithwaite, but he was denied from the spot by a brilliant flying Douchez save.