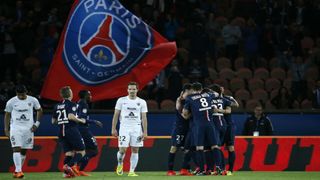 Paris Saint-Germain claimed pole position in the Ligue 1 title race after a 3-1 win over Metz on Tuesday sent them three points clear at the top of the table.

The Parisians - aiming for their third successive French crown - started the day goal difference behind Lyon, but PSG's game in hand was always thought to be crucial and so it proved against a Metz side who now appear doomed in their fight for top-flight survival.

That was despite the visitors responding well in the second half after goals from Marco Verratti and Edinson Cavani before the break put Laurent Blanc's side in control.

Modibo Maiga's 53rd-minute header gave Metz a lifeline, but the hosts, who end the season with clashes against Nantes, Guingamp, Montpellier and Reims, responded through Gregory van der Wiel to put the pressure back on Lyon.

Talisman Zlatan Ibrahimovic will return from suspension against Nantes on Sunday in a further boost for a PSG side well-placed for another title success.

Metz - unbeaten in four matches but still eight points adrift of safety - made a good fist of the first 15 minutes, only for Ezequiel Lavezzi's darting run to provide the flicker of encouragement the hosts needed.

Lavezzi, who surged at the Metz defence and beat multiple players, saw his pass turned over by Blaise Matuidi, but the move lifted PSG - missing injured pair Salvatore Sirigu and Serge Aurier - who took the lead seven minutes later through Verratti.

Javier Pastore, who starred and contributed all three assists, was given too much time on the ball and played Verratti in with a simple pass, allowing the Italy international to take a touch before slotting into the bottom-left corner from just inside the penalty area.

Cavani could have doubled their lead 10 minutes before the break, but could not get the ball out from under his feet, although the disappointment did not last long.

The Uruguay star brought the Parc des Princes crowd to their feet in the 42nd minute after winning the ball in midfield, finding Pastore and continuing his run forward.

Pastore returned the pass and Cavani did not have to break stride, bursting through Metz's defence with pace and power before dinking over goalkeeper Anthony Mfa Mezui.

Bouna Sarr thrashed over for Metz after the restart and Albert Cartier's men, playing with the freedom that trailing by two goals often brings, silenced the home crowd when Maiga netted.

Sarr did most of the work, storming down the right after beating David Luiz and producing a pin-point cross that Maiga, free of Thiago Silva, simply nodded in off the left-hand post.

Cavani could have restored the two-goal advantage but fired straight at Mfa Mezui from an angle, while at the other end, Florent Malouda should have done better on a counter-attack, with his tame effort easily saved by back-up PSG goalkeeper Nicolas Douchez.

Van der Wiel then made sure of the three points with 13 minutes left, when, after bursting down the right, he saw his low and hard shot hit Mfa Mezui - who should have done better - and sneak in.