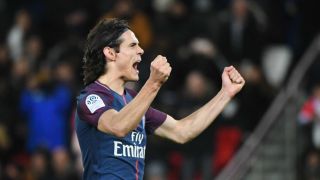 Edinson Cavani became the joint-top goalscorer in Paris Saint-Germain's history and Neymar recorded his first hat-trick for the club as the Ligue 1 leaders hammered Dijon 8-0 on Wednesday.

Cavani scored PSG's third goal with a simple header that drew him level with Zlatan Ibrahimovic on 156 goals for the Paris club, who moved 11 points clear at the top of Ligue 1, although the Uruguayan was denied the chance to break the record when Neymar scored a late penalty even though he had already completed his treble.

PSG's 11th win out of 11 home Ligue 1 games this season saw Neymar at his mesmeric best, although Unai Emery's side rarely needed to get out of third gear against desperately poor opposition, despite Kylian Mbappe having been left on the bench.

The in-form Angel Di Maria scored twice in the first 15 minutes, the first a superb strike from the edge of the box and the second from virtually on the line after Neymar's chip threatened to miss.

After Cavani's historic goal, Neymar got in on the act, bending home a glorious 20-yard free-kick to make the score 4-0 before half-time, the Brazilian then knocking in a rebound for an easy fifth after the break.

Neymar saved the best for last with his hat-trick goal, a dazzling solo effort, then substitute Mbappe wrapped up an eighth straight win for PSG before Neymar scored his fourth of the game from 12 yards despite his strike partner - and the Parc des Princes fans - calling for Cavani to take it.

PSG visit their nearest challengers Lyon on Sunday, when victory would virtually wrap up the league title with four months of the season still to play.