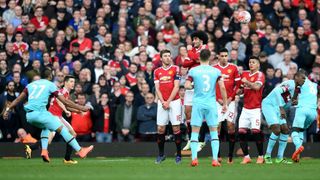 Not even Dimitri Payet believed he could score the audacious free-kick which put his West Ham United side 1-0 up at Old Trafford on Sunday.

West Ham travelled to Manchester United in the FA Cup fifth round and despite Payet's remarkable free-kick they will have to try and finish the job at Upton Park after Anthony Martial's late equaliser forced a replay.

Payet curled home a near-30-yard free-kick beyond United goalkeeper David de Gea in off the post and the Frenchman admitted he was not sure he could beat the Spaniard from that distance.

"I said to myself that even if I hit the free-kick well, right in a corner, with a goalkeeper like David de Gea it’s still difficult to score," he told BBC.

"I had a bit of luck in that it hit the post on the way in."

But beat De Gea it did, leaving Payet to describe the goal as one of his best.

"It was one of the best free-kicks I've scored, and to score in this stadium which I think is one of the most beautiful in the league…It’s a great day for me," Payet concluded.