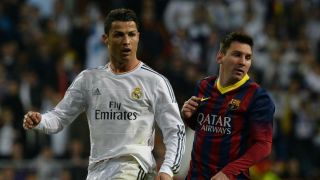 Players, pundits and fans alike have regularly debated whether Barcelona superstar Messi or Real Madrid counterpart Ronaldo should be regarded as the world's best player.

Argentina international Messi has won the FIFA Ballon d'Or award four times to Ronaldo's three, although the Portuguese has collected the prestigious award in the past two years.

Pele, regarded as the greatest of all time, has had his say and believes Messi has been the standout performer in the last decade.

Speaking to BBC Sportsweek, the three-time World Cup winner said: "At the moment people always try to compare Ronaldo with Messi [but] it's a different style.

"They are two great players, but in the past 10 years the best in the world was Messi."

Messi and Ronaldo have the chance to showcase their talents when Barca and Real face off in a mouth-watering Clasico contest at Camp Nou - with the hosts holding a one-point lead over the European champions at the top of La Liga.