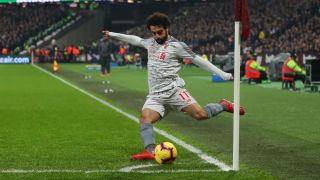 Manuel Pellegrini has called for fans found guilty of racially abusing players to be banned from Premier League matches in the wake of Mohamed Salah allegedly being targeted at the London Stadium.

Mobile phone footage, which was shared on social media, showed a supporter in the West Ham end directing expletives towards Liverpool forward Salah and abusing the Egypt international on the grounds of his Muslim faith during Monday's 1-1 draw.

West Ham launched an investigation to identify the supporter, and vowed to issue a lifetime ban to the offending party.

And Pellegrini believes that is the right approach to ensure similar incidents do not happen in future.

"Of course, I think that cannot happen in the stadium," he told a media conference.

"The best way to manage those things out of the game is to remove them from the great spectacle that is the Premier League.

"We must have high standards and when this happens, you must take action. The club knows how to work and says it cannot accept these kind of things in the game.

"It was a very good game and everybody was enjoying the game, so these people must be punished as soon as we can."