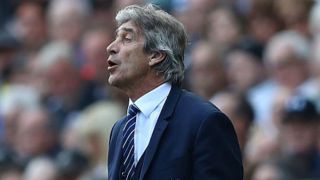 The former Manchester City boss has been heavily linked with a move to London Stadium in recent days, with the Hammers searching for a new boss after David Moyes' short-term contract came to an end.

And the Chilean is seemingly free to take the reins, with Hebei announcing his departure following a 2-1 victory over Chongqing Lifan on Saturday.

Pellegrini won the Premier League and two League Cup medals during his three-year stint at City, before making way for Pep Guardiola in 2016.