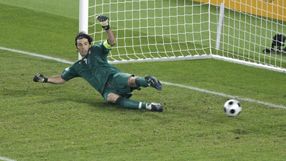 Buffon, who like England has a patchy record in shootouts despite Italy winning the 2006 World Cup on penalties, does not want Sunday's Euro 2012 quarter-final against England to reach the almost masochistic conclusion where one kick decides all.

The fact Buffon believes the two sides are so well-matched suggests penalties are a real possibility in Kiev if the two generally defensive sides cannot be separated.

"Definitely for all us it would be better to try to close out the match beforehand but if it goes to penalties so be it," captain Buffon told a news conference on Friday.

"On paper against England it is 50/50 who will win. It will be a game where little episodes will make the difference.

"I think it is a very balanced game, totally equal. I don't see any favourite."

Buffon celebrated madly when Italy beat France on penalties in 2006 after Fabio Grosso's winning kick but the keeper did not save any France penalties with David Trezeguet striking the bar.

He also failed to stop Zinedine Zidane's penalty in normal time, although that was only the second goal he conceded all tournament as he confirmed his position as the world's best.

Buffon managed one save in the lost shootout with Spain in the quarter-finals of Euro 2008, where he superbly saved a penalty from Romania's Adrian Mutu in the group stage.

Further back, he was on the losing side when Juventus lost the 2003 Champions League final against AC Milan on penalties.

The 34-year-old has long said he is not a particular fan of the shootout and unlike England counterpart Joe Hart, he has yet to analyse where Roy Hodgson's side tend to put their penalties.

"Tonight with my two team-mates [reserve keepers] we will look at a video and try to document it in the best way," Buffon said to roars of smutty laughter from fellow shotstopper Salvatore Sirigu sat beside him.

Buffon's relationship with penalties contrasts markedly with Hart, who has never been involved in a major shootout so has none of the baggage but no experience to dwell on.

The England man, in his first big tournament, was hailed by Buffon as one of the best three young keepers at the tournament who "can achieve great things in the world of football".

Hart, 25, said on Thursday that he would like to take a penalty in a shootout not just try to save them.

"If they let me," he said. "I would put my name forward 100 percent. I would back myself in a tournament."

England are serial losers in penalty shootouts having been eliminated that way by Germany at the 1990 World Cup and Euro 1996, by Argentina at the 1998 World Cup and by Portugal at Euro 2004 and the 2006 World Cup.

"I do my research," Hart said. "I know where all the Italian players put their penalties. But anyone in this room can do that... You just go to YouTube and 'click'..."