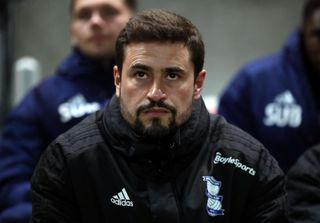 Birmingham manager Pep Clotet insists his team should have had two penalties in their 1-1 draw with Brentford.

Ethan Pinnock scored his first goal for the Bees four minutes after Lukas Jutkiewicz’s 13th-minute opener but then appeared to get away with handling a deep cross to the far post in the box late on.

“The rule is very simple, he touched the ball with the hand,” said Clotet. “They won the control of the ball thanks to that action.

“We have had penalties against us this season for handball that are not even close to what that was. But I respect the referee’s decision.”

Clotet also felt the Blues should have had a penalty for a challenge on Scott Hogan, which left the ex-Brentford striker with a swollen ankle.

“I could hear the contact from the bench – it’s simple,” said Clotet. “The foot was in the air so it was clear contact with a foot against a foot, it disrupted his shot.

Brentford boss Thomas Frank admitted Pinnock handled the ball but said it was not a penalty.

“I think the ball touched his hand, I agree it hit his hand but it’s not a penalty,” he said.

“He doesn’t move his arm towards the ball. But then there was shout for us to have a penalty where it touched the Birmingham player’s hand but I’m quite calm about this situation.

Frank praised his side’s spirit as they withstood late pressure in torrential conditions.

“We showed great character great resilience and showed we are growing to be a consistent and a top team,” he said.

“Especially after the equaliser we had some very good chances. For example the chance that fell to Ollie Watkins. We needed to get on the end of it.

“We dominated but if we want to win these types of match we need to take the chances we had or try to be even more cool in the decisive moment.”