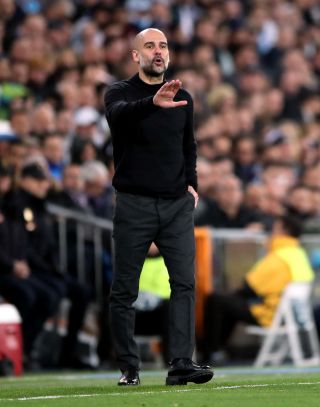 Pep Guardiola hailed a great result and performance but warned the job was not done yet after Manchester City’s stunning win over Real Madrid.

City came from behind to claim a famous 2-1 win at the Bernabeu in the first leg of their Champions League last-16 tie.

Gabriel Jesus and Kevin De Bruyne, the latter from the penalty spot, scored in the last 12 minutes as City responded in brilliant fashion to Isco’s 60th-minute opener.

The result gave the club some positive news after the shattering blow of their ban from European competition, which continues to cast a shadow over City.

Manager Guardiola said: “I’m happy for the victory, of course, and the performance as well.

“But after these 10 to 15 minutes we played really good and when we were playing better we conceded a goal we should not have at this level.

“But then we scored a goal and after that our rhythm came and we scored the second one.

“We are happy but, of course, there is the second leg. It is still not over. If there is one team in the world that can overcome anything, it is this club.

“Hopefully we can do a good performance and go through. We have not won anything yet but to win here is a big satisfaction.”

Guardiola admitted he was relieved to see De Bruyne score. City had missed five of their previous seven penalties.

He said: “I say thank you to Kevin for taking a penalty under pressure. Finally, after losing four penalties in a row, it is good for us.”

Guardiola insisted his players had not taken any extra motivation from the ban, imposed by European governing body UEFA over Financial Fair Play breaches.

He said: “We cannot control what happens off the pitch, only on the pitch. These players want to do it for ourselves and our fans.”

The only downside for City was the loss of defender Aymeric Laporte, who has endured an injury-ravaged season, with a hamstring problem in the first half.

Guardiola said: “He’s injured. He’s had four or five months out and then comes back for this demanding game. It’s a pity.

“We dreamed of having him fit to the end but unfortunately we have suffered a lot in this department this season.

“But with John (Stones), Eric (Garcia), Nico (Otamendi) and Fernandinho, we will go on.”

Real’s night got even worse when captain Sergio Ramos was sent off – for the 26th time for the club – for denying Jesus a goalscoring opportunity late on.

They now have to recover quickly for their top-of-the-table LaLiga clash with Barcelona on Sunday.

Manager Zinedine Zidane said: “I’m not happy that we played well but with 10 minutes left, we changed and made errors which hurt us.

“We didn’t deserve it but this is football. We needed 90 minutes of total concentration, especially against a team like City.

“But we know that there’s half this tie left and now it’s simple – we have to go to City and win.

“On Sunday we have another opportunity. It’s a big match and right now we have to recover properly and perform great.”