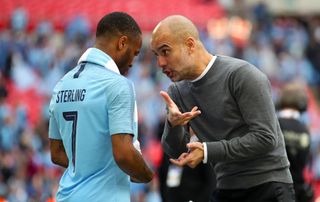 Sterling did not rule out playing for Real Madrid in the future in an interview with Spanish outlet AS, although he insisted he was “really happy” at City for now.

“The players are free to talk and say what they think,” said Guardiola, who was not concerned at suggestions the England winger could be looking for a way out of the Etihad Stadium.

“We are not here to tell them what they have to say. It’s normal in the Madrid media to speak about Madrid, that’s normal.”

Guardiola’s side take on Premier League rivals Leicester at the King Power Stadium on Saturday evening.

The Spaniard said: “I’m completely sure (of) the commitment of our players, it’s about what they’ve shown for many years, nothing changes.

“At the end of the season nobody knows what is going to happen. With calm we decide what we want, but for the next three months the commitment will be incredible.”

Guardiola said he had not received any support from rival clubs in the wake of City’s two-year ban from European club competition after “serious breaches” of UEFA’s financial rules.

When asked if there had been any reaction to UEFA’s sanctions and City’s intention to appeal against them in the Court of Arbitration for Sport, Guardiola replied: “Nothing at all.”

The former Barcelona and Bayern Munich boss said he had no control over other people’s perception of City, but that he remained proud of what he and the club had so far achieved.

“I know how hard we work and I’m so proud of what we’ve done (during) these years together,” he said.

“I have a different opinion, nobody has helped us outside, we did an incredible job day by day, game by game, and nothing will change the opinion.

“I repeat the same, it’s not finished, it’s not over. We appeal and we see what happens.”

Guardiola, whose side sit four points above third-placed Leicester in the table, confirmed Sterling will miss Saturday’s game at the King Power Stadium, but is making good progress following a hamstring injury.

David Silva will also sit it out after being forced off during Wednesday night’s home win against West Ham due to a minor knee problem.

Guardiola said Leroy Sane needs a little bit longer before his return to action after his recovery from a serious knee ligament injury sustained in the Community Shield against Liverpool in August.