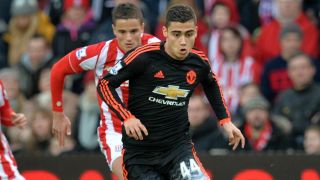 Manchester United starlet Andreas Pereira has reiterated his desire to leave the club on loan with the Olympics in Rio de Janeiro fast approaching.

The Brazilian midfielder has played just 78 minutes of Premier League football this season, with most of his football with the club coming in the League Cup, which United exited after just two games in a penalty shootout against Championship outfit Middlesbrough.

Pereira, 20, has said he was willing to bide his time at United, but now wants a loan move in order to get the game time he needs to impress Brazil coach Dunga in time for the 2016 Olympics in Rio de Janeiro.

"I'm doing my work for United, but of course, I have to show up for the Brazil staff, so I need to play more and have more opportunities," he told Globo Esporte.

"To play in the Olympics is a big dream."

Pereira said that while the lack of game time was frustrating, he could not accuse his club manager Louis van Gaal of completely ignoring him, saying that the Dutchman is regularly giving him feedback.

"He asks me to continue to work hard, that the one day the opportunity will appear," he continued.

"Of course I get frustrated sometimes because I'm not playing, but the coach always talks to me.

"I am a United player. I do not know if they want to loan me out, but I'm working for more opportunities."