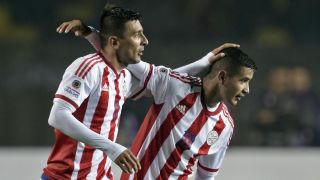 Paraguay will be without attacking duo Roque Santa Cruz and Derlis Gonzalez when they meet Peru in the Copa America third-place play-off.

Ramon Diaz's men are aiming to bounce back from a humbling 6-1 semi-final defeat to Argentina and must do so with a reshaped forward line.

Experienced striker Santa Cruz sustained a hamstring strain and Gonzalez injured his thigh inside the opening half an hour in Concepcion.

Diaz's forward woes do not end there, with Nelson Haedo Valdez nursing a thigh problem, while defender Bruno Valdez is suffering from a similar complaint.

However, San Lorenzo midfielder Nestor Ortigoza is back in contention after a knock ruled him out of the quarter-final triumph over Brazil and the semi-final tie.

Peru have far fewer injury worries as they aim to replicate their third-place finish of four years ago.

Schalke star Jefferson Farfan missed training on Wednesday due to a sprained right ankle and faces a late fitness test.

Striker Paolo Guerrero netted a hat-trick when Peru beat Venezuela 4-1 to finish third in Argentina in 2001 and repeated the feat during the quarter-final triumph over Bolivia this time around.

Peru coach Ricardo Gareca does not expect Paraguay's chastening experience last time out to have much impact on their performance.

"Paraguay are always dangerous, regardless of their thrashing," he said. "It's going to be complicated game no matter the [injury] absences."

Diaz recognises that his players must be on their mettle to avoid further disappointment.

"We know that Peru have shown that they are in the process of growing and I'm sure both teams are going to give their best to finish in third place," he said.