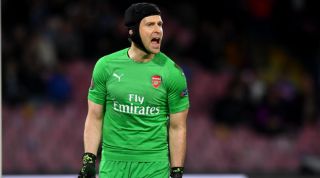 Speaking to the Evening Standard, Cech was responding to the question of Arsenal facing a third year out of the Champions League if they lose to Chelsea tomorrow night.

“It will sound strange but I think generally at Arsenal there is not enough pressure,” said the 36-year-old.

Chelsea, in comparison, have a different club mentality according to Cech.

“At Chelsea, at the times when we drew, it felt like a funeral in the dressing room. It was so bad,” he recalled.

“If we drew against a big team at home, it was like, ‘Oh no, it is impossible we didn’t win at home’. It came from everywhere: the players, the coach. Since the start when I was there, the pressure was there every game.”

Cech, however, remains confident that the Gunners can pull victory out of the bag in Baku.

“I feel that when Arsenal need to win, we win,” he said.