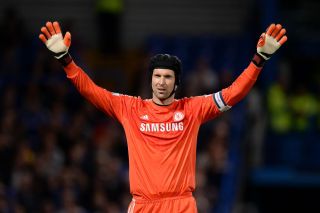 Cech retired as the goalkeeper with the most clean sheets in Premier League history (202).

During his days at Chelsea and Arsenal, the Czech established himself as one of the game's most decorated goalkeepers.

He won four Premier League titles, four FA Cups, one Champions League and a Europa League title during his days at Stamford Bridge, and added another FA Cup to his collection at Arsenal.

Cech returned to Chelsea after his playing career came to an end in north London, taking up a role as technical and performance advisor.

But, two months into the season, the 37-year-old has made the most surprising move of his career so far after it was announced that he'd be playing in goal again - this time on the ice rink.

NIHL side Guildford Phoenix have revealed Cech as their new netminder and will begin their new chapter on Sunday, when he's due to make his debut.

**PETR CECH SIGNS WITH THE PHOENIX**

The ex professional footballer will begin his ice hockey career this Sunday when he makes his debut for the Phoenix!

Cech has always been a big fan of the sport and is relishing the challenge that faces him.

"I hope I can help this young team achieve their goals," Cech told Guildford Phoenix's website.

"After 20 years of professional football, this is going to be a wonderful experience for me to play the game I loved to watch and play as a kid."

Guilford's new man says his role at Chelsea is flexible enough to allow for this new experience.

"Luckily my job at Chelsea doesn't stop me in my spare time from playing the game I loved as a kid and which I've been playing for years," he said.

"While being a professional footballer I couldn't play the game for obvious reasons. Now I can."

Guildford Phoenix go up against Swindon Wildcats 2 in their next NIHL game on Sunday.