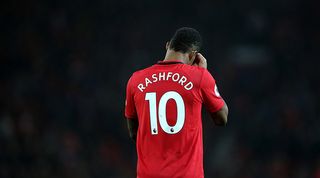 Marcus Rashford’s performances for England might be quite telling over the next week. Despite Jadon Sancho's incendiary form for Borussia Dortmund, Gareth Southgate has largely remained loyal to Rashford and, truth be told, he has always looked like a slightly better player for his country than club.

It seems a very long time ago that Rashford made his debut. When the gloom of Louis van Gaal’s time at the club reached its darkest point and Manchester United's cupboards were at their barest, he appeared like a burst of sunshine. In a way, it is a long time ago. Rashford is still just 21, but it’s been three-and-a-half years since that day at Old Trafford and those two first-half goals against Arsenal.

And the only goal in that Manchester derby.

And the winner against Aston Villa.

And that absolute peach against West Ham in the FA Cup.

A lot has changed in the time since, notably the tone of the conversation which surrounds Rashford. When he emerged, it was into that happy territory within which the debate is never too harsh. He was a teenage, homegrown player and he was scoring goals for fun. And he was doing it at a club like United before he was even old enough to drink. Who doesn’t enjoy seeing that?

But the world didn't stay seduced for long and, quickly, Rashford ceased being a story and started to become a commodity instead. What was he? What could he become?

That’s when his world started to become more complicated. Manchester United fans are often accused of embellishing Rashford’s talent on account of that backstory, of hallucinating themselves a world-beater at a bleak time in their history.

But is that really true?

Has there, for instance, ever been a point at which he was proposed as a truly elite player? Has Rashford ever existed in the same atmosphere as those who have been treated that way in the past – with the wild hyperbole and outlandish predictions? Not really. It's been more complicated than that.

Rashford became one of Jose Mourinho’s targets during his time at the club. United's former manager didn’t quite marginalise him but he did limit his playing time, starting the youngster in 16 Premier League games during his first season and 17 in his second.

QUIZ! Can you name every player to score 50+ goals for a single Premier League club?

What that created, inadvertently, was almost a binary relationship between the two, in which Rashford became the answer to problems that Mourinho wasn’t able to solve. It was an extraordinary burden for him to carry and its weight showed, too: whenever he was given chances under Mourinho, invariably his finishing would seem jittery and unsure.

The situation is different now, but many of the same pressures continue to apply. Rashford has chief responsibility for United’s goal tally and, in concert with others, for their general difficulties in the attacking third. He owes a big debt to Ole Gunnar Solskjaer too, and was (presumably) part of the premise for letting Romelu Lukaku leave for Inter Milan.

It’s not a role Rashford chose, it’s not one he’s suited to, and yet it’s one he’s having to play. United’s spiral of decline is continuing and, unwittingly, he’s right in the middle of it; seemingly saddled with anxiety and heavy-legged just two months into the season.

There's a problem with Gary Neville's analysis of Manchester United

But that’s why England probably calms his pulse. Away with the national team, he’s asked to play a role which is more commensurate with his ability. He’s not a star. He’s not expected to be one. In fact, he’s only the third-most important member in his department of the side and, when he does play, it’s in a depoliticised context. At St. George’s Park, he is neither an academy product nor a big-money signing. He’s not attached to one head coach’s reputation or another – he's not emblematic of anything at all. Instead of being a topic to fight about, he’s just another member of the squad.

So England treats Marcus Rashford appropriately. The result isn’t startling brilliance; he doesn’t become an immeasurably better player just by wearing a different shirt. But he does appear lighter and freer, less weighed down, and offers a glimpse as to what he might be for his club if the circumstances were different.

LIST 10 managers whose reputations were ruined in the Premier League

FUN Coleen Rooney vs Rebekah Vardy: the best tweets on a glorious day for the internet